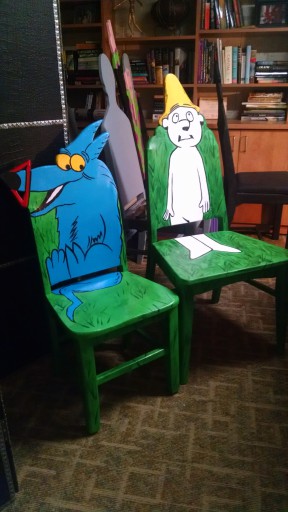 This special commision went to a fan of the movie The Point! who wanted his own Oblio and and dog arrow..The Point! is a fable that tells the story of a boy named Oblio, the only round-headed person in the Pointed Village, where by law everyone and everything must have a point. Released in 1970, The Point! is the sixth studio album by American songwriter and muscian Harry Nilsson.

It was accompanied by an animated film adaptation directed by Fred Wold, which aired on ABC a few weeks after the albums release. Its lead single, “Me and My Arrow” peaked at #34 on the billboard Hot 100. The VHS and DVD releases feature another of Nilsson’s friends, Ringo Starr, as the father. Another version, seen on cable television in the 80s and 90s, featured narration by Alan Thicke. The voices of the son and Oblio were provided by Mike Lookinland, best known for playing Bobby Brady on the television series The Brady Bunch.